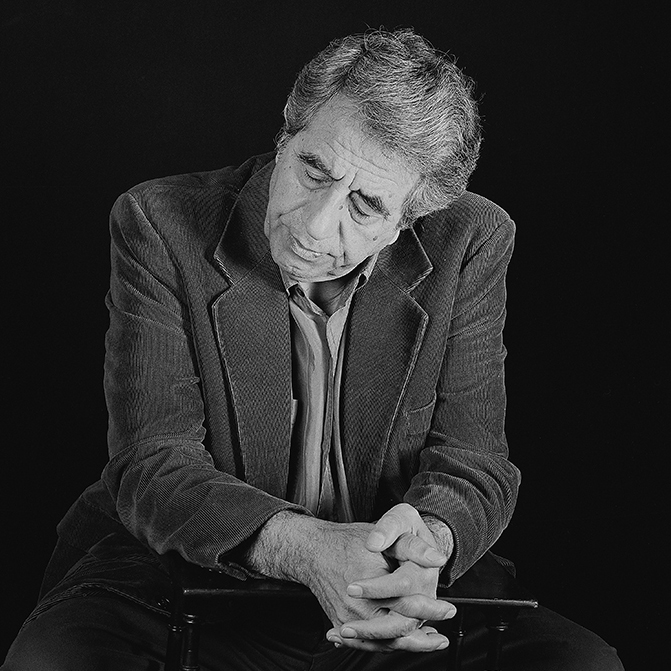 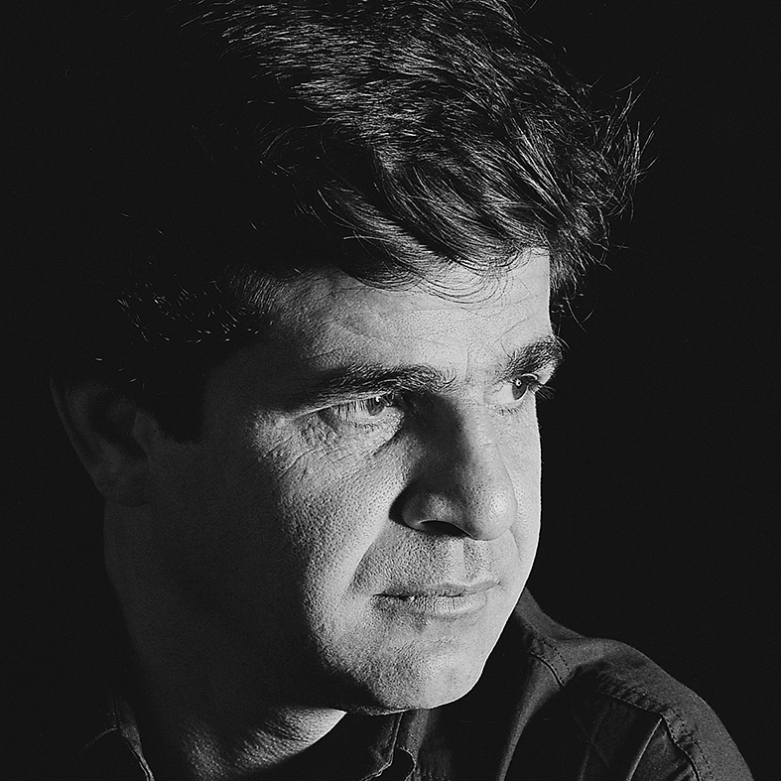 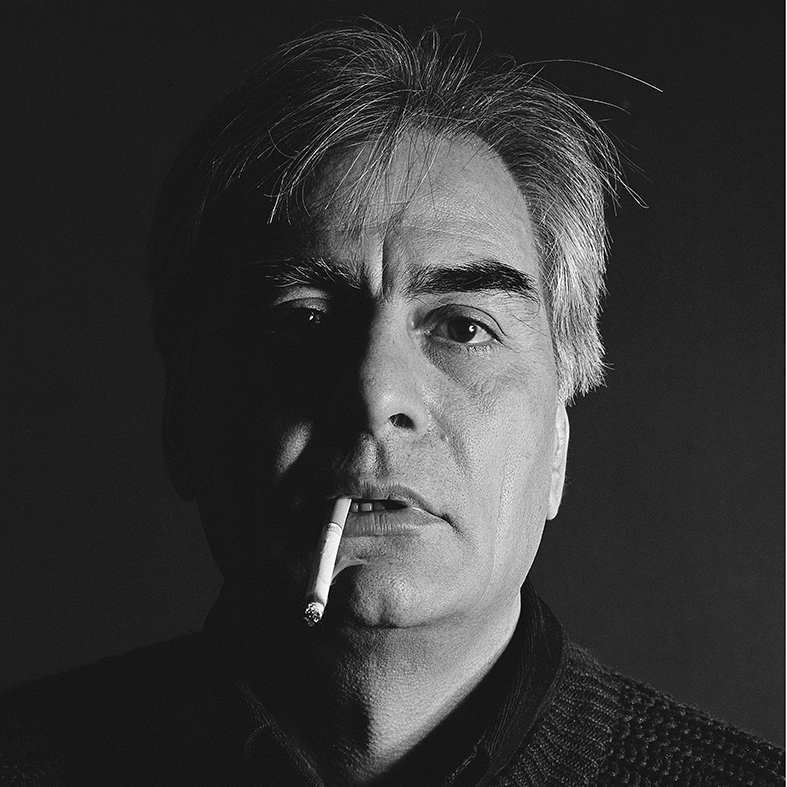 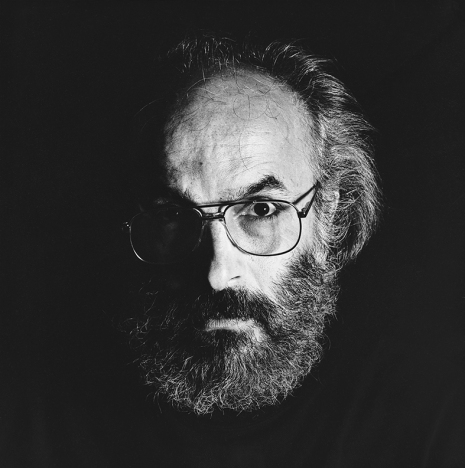 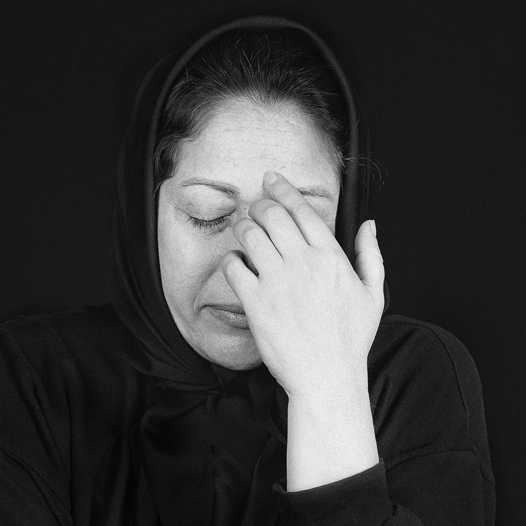 In the afternoon of a day I didn’t know which day of the week it was I went to see Maryam Zandi’s photographs. She showed me the photographs before printing the book so that I could write something as a preface. She had put plenty of them side by side on every piece of furniture and on the floor and she was now explaining to me how those pictures were taken. I knew how a photo was taken without explanations on the part of the photographer. I’ve photographs twice. She works so unceremoniously that I guess others too have felt like what I did before her camera. Without any explanation, suggestion or request … I suppose everybody was just him/herself before her camera.
Seeing the pictures didn’t take more than an hour. When I came out I still didn’t know what day it was. But for me it was a Friday evening. Then I went to see a friend of mine who was expecting me. When he saw me he asked, ”Has something happened ?!” I said ”No”, but something had happened. I was moved by t hose pictures and all the way I had kept thinking of the same topic : was photography an art or a technique? Having seen those pictures, my inner debate ended in the interest of the art. The photographer reported the same painful grieving image in all those pictures of cheerful, sad, old and young f aces ; even in the face that was laughing…

The photographer has looked at her models in an abstract, subjective and non-visual way. She has deliberately ref rained from making a mechanical copy of real faces venturing an absolutely new experiment in making real sketches of special people; a not very sweet experiment. The angle, the format, the lens and the sharp lighting style shows that the event that has been photographed depicts the photographer’s thought and that it’s not photography as recording images.
According to the photographer the series of pictures started with the oldest of her models ; ending with the youngest. Maybe the photographer’s idea could be better revealed if the series was set the other way round or if one went through the book from left to right. This sty le of photography and this way of setting the pictures in the order of the models’ age somehow narrates the anxiety that is the product of the incessant passage of life.
They say anxiety is man’s most natural feeling as immediately after birth the countdown for death begins. A vague feeling that is seen in every single face supports this claim. This sense of anxiety was less evident in the earlier works of Maryam Zandi; or it was made to look less evident by wide angle lenses, and a backdrop that included f lowers, books and furniture. This time the photographer casts another look at her subjects. Half of every face is hidden in darkness and a lightning of flashlight anxiously lits the other half .
Definitely the photographer knows those capabilities of the art of photography that generously gloss over every fault. She certainly knows how to use wide and tele lenses and the functions of soft lenses and modifying filters that .smoothen the traces of passage of time. And most certainly she knows the impact of application of soft and kind ways of lighting particularly on more familiar faces.

This time, however, I think Maryam Zandi has annoyed her models. But she is not a photo shop portrait artist. So, making her models happy is not part of her responsibilities and it is not their satisfaction on which she makes a living. And she doesn’t take those pictures as memorials or reminders. So she does not retouch them and does not insist on making people more beautiful. She is trying to express her impression of the world she lives in. She speaks about the most inevitable and fundamental grief of man. A grief that is the outcome of the anxiety of being riddled by the passage of time. An anxiety that is equally evident in the photographer’s f ace. She reports bitter images of the reality of life and the bare truth of passage of life instead of recording beautiful but otherwise deceiving images.
Once Buddha, who was still being called prince Sidhartha came out of his glamorous palace for a walk and
saw an old man, hunchback and limping ahead with difficulty. Sidhartha was so seriously moved that cried out “How sad it is that poor ignorant people overwhelmed by arrogance and absurd pride of youth fail to think of old age”.
Buddha had seen his own fate in the ailing old man’s face and it was then that he was missioned to save
humanity. Buddha’s way was to deal with other aspects of man’s life. A man who is doomed to be destroyed.
Maryam Zandi too has seen these popular faces with the eyes of meaning. Faces that are both familiar and disrupted, and there are few that are exceptions. From the first one who is the oldest to the last one who is the youngest of all. Like an old family album, it seems the whole book follows the fate or the passage of life of one and only one person from his youth to old age. The first picture has the trace of passage of time on it in full; and the last one that is a fresh young f ace conveys a sense of suspense regardless of the beauty of his eyes. A s if he has seen his fate with his own eyes. I look at the eyes of the photographer on an old poster on the wall next to the entrance. It’s a picture of a beautiful woman with a camera in her hands staring at her own image in the mirror. Those were the days when the photographer saw the world another way. The passionate ignorant days of youth when beauty was a gift from God. When the photographer’s look was full of hope. When she did not interpret the world and just let the images talk for themselves. In her eyes beauty was the same as the truth; and it was enough that she was beautiful. Maybe the pictures would look otherwise had the photographer looked at her models with the same eyes and the same camera. But she certainly chose not to do that. She has dealt with her subjects, consciously or unconsciously, with a special look along with a regret for the passage of time. Otherwise, she believes that faces take their shape thanks to details and differences. And it is not a sheer coincidence that half of those f aces are in the dark. She knows well that not all faces can be lit in the same way. Every face calls for a certain distance, a certain light, a certain angle and a certain lens; and you just can’t do justice to the f aces by distributing the light among them on an equal basis… But Maryam Zandi did this; she could do that. She has certainly responded to her own feelings and has definitely preferred her own satisfaction over those of the others. This time she has reached to a presumptuous clarity and f rankness in her work.
I believe the main theme of her book is that of wearing out. People have been only excuses. If you go through her book from left to right you will see a clear picture of decline. The beginning and final pictures as well as the other photographs in between look like the chains that connect a beginning to an end. Everybody can see his own place clearly in this marathon of wearing out. The suspense in each and every one of these faces indicate that everyone in his loneliness thinks of the inevitable vicious circle of wearing out. Those who may be at war with the cruel time to live more than the other s or those who may wish to look more desirable than the others seem to be willing to be pictured well in their most durable picture in a durable book. Undoubtedly this is a natural right for every man to want to have a special and positive image in the public.

I don’t know anyone who would be indifferent to his or her own image. In my latest trip I photographed a homeless man who was sleeping in the sidewalk, or maybe he was in coma. When the flashlight awakened him, although it was too late, yet he brushed his greasy hairs with his fingers and covered his knee that was showing out of his torn t rousers, and then he went to sleep again.
Here, however, the photographer is not concerned about other people’s satisfaction. She is thinking of something more profound and so presents a real and creative picture of people. A cruelly real picture of passage of life that many of us may naturally not like. It may not be very redundant here to quote Fellini as saying that in the same w ay an individual reveals hidden, mysterious and untouched corners of his unconscious mind in his dreams, a society does the same through the creativity of its artists.
Artistic products are nothing but man’s actions, reactions or creativity in his dreams. The same is true about the f unction of a painter, a poet, an author, a filmmaker or a photographer ‘s look. With their creativity and with their way of expression on canvas, paper or movie screen they organize the unconscious mind of the human society . And this is possible only through perceiving true, and not real, image. If we accept this as a principle, then any expectations, limits or frameworks in art will be discredited. Can one consider limits for the unconscious? Can one orient the dreams? Can we make them beautif ul, or can we simply order them? The response of an individual who dreams is spontaneous . It is the same with the work of an artist. Let’s see the work properly and forget about if we’ve been imaged well or otherwise.