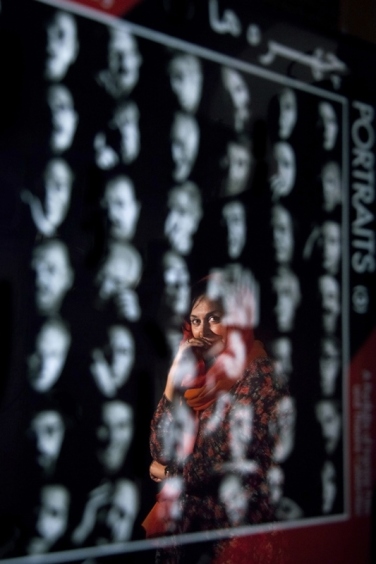 Maryam Zandi (born 1947 in Gorgan) has spent her school years in Gorgan and then graduated from Tehran University (School of Law & Political Sciences). Beginning her photography career in 1970, she was awarded with the first prize of the ministry of art and culture’s national photography competition. In 1972 she joined Iranian national TV-Radio as a photographer and later by initial publications of “Tamasha” magazine, she became Iranian Television and Tamasha magazine’s public relations photographer.
Maryam Zandi remained with National Television for the next twelve years. Within this time she also began capturing photos of the revolution in 1979 as well as many other photographic experiences. Her first significant photography project (“Chehreh-ha: Portraits”) was formed within these years after revolution (1981) which by the beginning of the Iran-Iraq war and her trip to France (1986-1989) remains incomplete.
However her first photography book (“Turkmen & Sahra”: Turkmen & Desert) was published in 1982. This is the first collection portraying Turkmens of Iran and also the first collection which by the means of photographs intends to study and explore one of the Iranian ethnic groups. Her university thesis is also a sociological research about Turkmens of Iran.
After returning to Iran in 1989, work on the incomplete project (“Chehreh-ha”: Portraits) is resumed. This work is still ongoing and after 26 years a unique extensive photography archive of famous and influential contemporary Iranian elites (as well as some non-Iranians) in the fields of literature, visual arts, cinema, theater, architecture, music and politics is shaped. Maryam Zandi has published more than ten photography books until now.
Her last publication is the “1979 Revolution” photography book which is a collection of incidents happening around the time of the Iranian revolution in 1979.
Since 2000 Maryam Zandi’s photographs in collaboration with “Ebrahim Haghighi” (Graphic designer) have designed and published more than 80 different types of artistic calendars. Most of these calendars are the first of their kind containing various photographs related to Iran. By publishing these calendars, Maryam Zandi has taken a huge influential step in improving the imagery culture and photographic taste of the Iranian people by taking these diverse range of photographs from every corner of the country to people’s household.
In 2005 Maryam Zandi along with twelve other famous and influential Iranian photographers were selected by the “Society of Iranian Photographers” to establish the “National Iranian Photographers’ Society (NIPS)”. In 2009 by the first meeting of the board of directors, Maryam Zandi –achieving the highest vote– was elected as the first chairman of the board. She resigned from NIPS in 2013.
In 2010 she was invited to receive the “first degree medal of art” from the president, however she refused the medal in protest to lack of freedom and professional dignity of photographers in Iran at the time. Same year, she received an independent award as the most influential photographer of the year in the “Social Documentary Photography Festival” for supporting the rights of Iranian photographers (“Sheed Award”). In 2014 she won the same prize again, for publishing the book “1979 Revolution”.
Maryam Zandi has also been active in designing and making glassworks. She has held three exhibitions portraying her glass art. Within the past 40 years, Maryam Zandi has been one of the most active, dynamic and influential photographers of the country.

The page you are looking for has either been removed or relocated.

Please return to the home page or use the search form below to find what you are looking for.